New awards have been added to replace those that have been removed. These include the following:

New weapons have been added for both variety and historical purposes. Most weapons are selectable only by the team who's historical counterpart (or alliances) actually used that weapon. In most cases a replacement weapon with similar capabilities has been given to the team that lost access to another weapon. For specifications on each weapon, please have a look at the Weapons Overview page.

New facial skins have been added, by class and team. This is a teaser of our planned character customization system.

New ranks have been added, as there are many more skills! Also, the way ranks are calculated has changed as well to adapt to the new skills.

Rank calculation is based on how many skill levels you have in total, not whether you have some skills maxed out or not. Being there are 7 skills and 9 levels per skill, you have 63 total skill levels to gain. The middle column labelled "Skills to Earn" has the number of skill levels you need to gain in order to earn that rank. It was designed to make the General ranks tough to progress through. If you can understand the following, this is also how it works.

New fun modes have been added! Set up the modes you want with the jp_insanity CVAR.

Throwing knives bring back the good ol' days of Goldeneye for the N64. Unlike other mods, this is gained as a skill. Bind +attack2 to the key you normally have for alternate fire (weapalt). +attack2 will do all the glorious things that weapalt did, PLUS you can throw knives with it. Here are some more details of throwing knife behavior in ET:

Alluding to the days of RTCW single player, we have added the foot kick back into the game. The purpose of the kick is that it's a melee attack used to knock a player back, much like a shove, but with damage. To perform a kick, bind +kick to a key or set it up via the No Quarter menu. Note that you'll not be able to move while kicking! 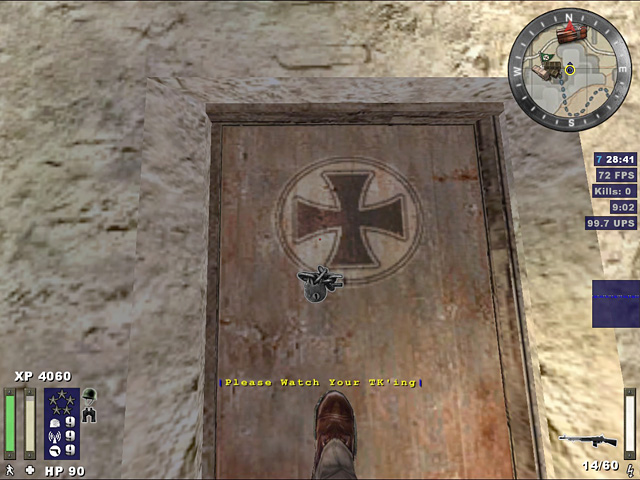 One of the most obvious things missing from unmodded Enemy Territory were leaning animations. Sure, it appears you are leaning when you are in 1st person view, but you never see other players lean. This used to let people hide behind corners and lean out and ambush someone, which is not very fair. In No Quarter, we have remedied this by adding in leaning animations. When you lean, you are now seen as leaning to other players.

We have added a new style of skill that may be familiar to RPG players, called an aura based skill. These aura based skills do nothing for yourself, but help out teammates instead. How aura based skills work is quite simple. If you are close enough to a player with an aura based skill then you will receive the effects of that skill. We have tried to include one aura based skill per class. The skills do NOT carry over to other classes, so you can't be a Medic giving off 5 auras. Aura radii can overlap from different teammates, but if it's the same aura, the effect does NOT multiply. An aura that would recharge your stamina at twice the normal speed will NOT charge it four times faster if you're within two like auras. Overall, these types of skills will hopefully inspire people to stick together and work as a team.

Currently, there are 3 aura based skills in No Quarter.

When within another player's aura, you see the icons above and gain the benefits from each. Once you are out of range of that player, the icon disappears. This is why sometimes during spawn you see these icons pop in and out a lot. Read more about these aura skills and what they actually do in the Class Skills section

No Fieldops on your team? You can still give out ammo... your own. There are 2 new commands in No Quarter to do that: 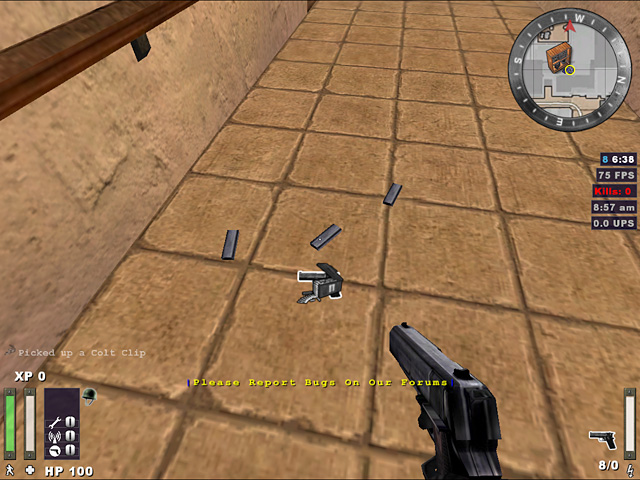 */dropclip does as it says, drops a clip from your current weapon. If you don't have a full clip left, you will not drop anything. */dropweapon does as it says too, drops your current weapon. This works with weapons in weaponbank 2 and 3 only. Sharing ammo by dropping weapons and clips does not award you XP. It gives ammo to your teammates, which will help you fight. Teamwork!

By setting cg_teamAutoexec to 1, No Quarter will look for configs in your 'noquarter' directory. These configs are:

These will be executed when you switch teams. Some players may use spawn/class selection script in conjunction with this, without having to select the team.

An example of team configs is HUD color changing and name changing.

In this example, JaquboSS changes his HUD background and part of his name to red when on Axis, changes them to blue when on Allies, and green when spectator. 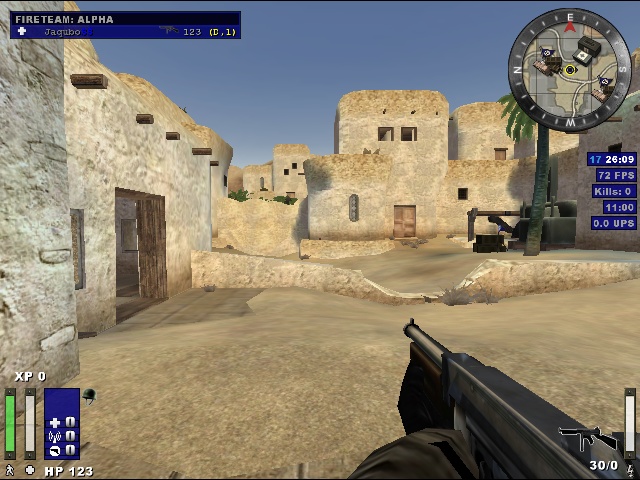 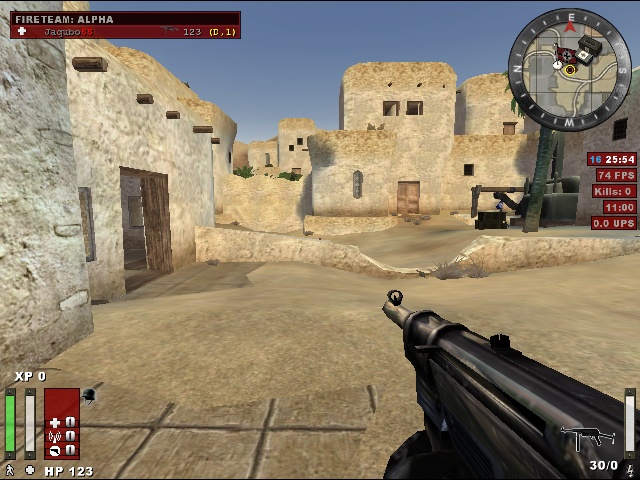 Similar to the above, if you do not have enough chargebar to use your current weapon/item, your charge bar itself will display as bright red.

Since 1.2.5 there are 2 different symbols showing arty and airstrike status.

Now, when underwater, your HP bar turns into a blue oxygen bar and shows you how long before your start taking drowning damage.

This entity removes protection from damage, it is set similary like trigger_hurt

Usage - Big falls that can be exploitable with teamkill-revive-push, and cannot have kill trigger, like graverobbery pit

* life - seconds to remove after entity is used

From NoQuarter 1.2.5 - 1.2.7 , Linux and Windows server and client could decide to set this new feature. If we have a multicore CPU, it allows to decide what CPU/CPUs from the available ones will execute the game. This is useful for both reduce the cache-misses caused by the constant switching of cores that the game runs on and improve the system utilization design. Some examples:

a dual core user could decide to run the game with one core and exec other background applications with the other one, with the result to have a more fulid gameplay then just run the game on all, busy, available cores you can run a local server with one core and a local client with the another core A server admin can dedicate one core to each ET server he wants to run on his machine, or divide the cores between the game server and other applications

Usage: In order to use this feature, you've to set the cvar cpu_affinity. This cvar is a bitmask value and it works just as other bitmask cvars work: each bit represent a core available on the system. The default value is 0 and it means the affinity is set to all available CPUs. Example : Dual core: In a dual core system, we will have CPU0 and CPU1. Then, the bit values are :

If you want to set the game affinity to CPU0 then you've to set:

If you want to set the game affinity to CPU1 then you've to set:

If you want to reset the affinity settings, so make the game to run on both CPUs, then you've to possibilities:

It's easy to understand that a value of "3" means the game will run on both CPU0 and CPU1 Example : Quad core: In a dquad core system, we will have CPU0, CPU1, CPU2 and CPU3. Then, the bit values are :

The way to set up the affinity is exactly the same as before, only now you have more CPUs you can use, so you can make different combinations like:

Useful Linux tools There are some useful tools for Linux systems that allow to monitor the CPU usage and process-affinity. For Debian etch you can try the package schedutils. Installing this will allow you tu use the command taskset, that can get or set the CPU affinity of a particular process. To know the PId of a process you can simply use the command top in the Linux console, and then run the command:

to get information about the affinity of the process PId. Taskset also allow you to change the affinity of a process through Linux console, but WE STRONGLY RECOMMEND TO SET THE AFFINITY OF ET WITH THE NEW CVAR AND NOT THROUGH THE LINUX CONSOLE. The lenny package to enable this features is linux-util. Another useful Debian etch package is sysstat that will produce statistics about the CPU usage. You can print to the console this statistics with the command:

That will give you a lot of informations you can use to design you server's affinity settings.

Note: Check if setting affinity on Windows Vista & higher really is an improvement. Some users reported fps drops if affinity is set on those OS.

Since NQ 1.2.5, No Quarter has several new mapscript commands for accum/globalaccum. Note that these mapscript-commands will only work since this version of No Quarter! You can now copy accums, compare accums, increase/decrease/divide/multiply accums by other accums. It's a nice feature if you want to use counters for scoreboards and such.

random_accum will generate a random number in the range 0 to accum <g> - 1.

set_accum is used to copy an accum value to another accum:

dec is used to decrease a value in an accum.

mul & div use a constant value.

mul_accum mutiplies one accum by another accum, the result is stored in the first accum:

The div command returns only whole numbers (of course).